Distracted Drivers Are a Scary Reality on South Carolina Roads

Living in a world where multi-tasking is encouraged, so many South Carolina drivers get behind the wheel and fail to focus fully on the one thing—driving—that should receive 100 percent of their concentration.

This is what is commonly referred to as distracted driving. According to the Centers for Disease Control and Prevention (CDC), more than 3,100 people died in the U.S. in crashes involving a distracted driver in 2017.

What are examples of distracted driving? 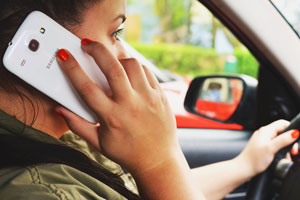 When people think of distracted driving, they immediately think of people texting on their cellphones. However, there are so many different things that can take a driver's attention away from the road:

In the past few years, incidents where a driver has been using a cell phone or other mobile device have received a lot of attention. Many states have begun to institute laws regarding cell phone use. In 2014, South Carolina banned texting and driving, but the penalty is just a $25 fine and officers often have a difficult time enforcing the law because drivers claim they're simply using a GPS or controlling their music. In 2019, South Carolina lawmakers attempted to pass a hands-free law but were unsuccessful. Many people are pushing for statewide distracted-driving laws; we will be monitoring developments closely.

If you were injured in an auto accident in the Columbia area due to a distracted driver—or any other reason—contact the Law Office of Kenneth Berger at 803-790-2800 for a free consultation. If you have been harmed by the negligence of another person, you may be eligible for a financial recovery for your medical bills, long-term disability, lost income, and more. You can also start a live chat to speak with a member of our team 24/7.