The Truck Accident in South Carolina 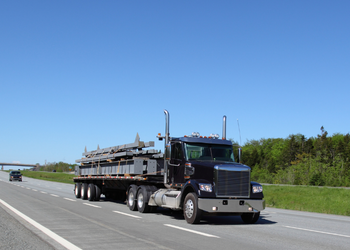 When I first met with our client, who we will call "Ms. Caldwell," she described exactly how the accident occurred. Her story never changed. She was on the way to a morning meeting with fellow soldiers in Columbia. In front of her on I-77, there was a pickup truck pulling a trailer with a small concrete mixer.

The pickup truck began to drift left, then overcorrected back to the right, causing the mixer to fall on its side. Ms. Caldwell slowed down and kept a safe distance from the pickup as this was occurring. Unfortunately, the dump truck behind Ms. Caldwell did not use the same degree of caution.

This would not come as a surprise if you knew the dump truck driver's history. After filing suit, we learned that the driver ("Mr. Anthony") had been fired from his previous job because of too many recent accidents. We also discovered that Mr. Anthony had a number of speeding tickets.

To make it worse, the trucking company that then hired Mr. Anthony never checked his driving record or contacted his previous employer. South Carolina's commercial trucking laws require that steps be taken to ensure drivers are properly qualified and trained. The company that sent Mr. Anthony out on the road with Ms. Caldwell on the morning of the accident, failed to follow many of the most basic hiring and training laws.

As a result, Ms. Caldwell found herself in imminent danger as an unqualified driver behind the wheel of a dump truck sped toward the back of her slowing car. At the last moment, the dump truck driver attempted to swerve left, but he still crashed into the back driver's side of Ms. Caldwell. Her vehicle was totaled, her neck damaged, and her brain concussed, our South Carolina car accident lawyer explains.

Consequences of the Wreck

Ms. Caldwell was transported from the site of the truck wreck in Columbia by EMS. She was stabilized at the hospital and ultimately released to the care of her military doctors. Due to severe headaches, memory lapses, and light sensitivity, Ms. Caldwell was placed in concussion protocol. Those symptoms improved over time, but her neck pain did not. Rather, she began experiencing tingling and numbness down her left arm within days of the wreck.

After trying to treat her injuries with medication and therapy, doctors later decided Ms. Caldwell needed to undergo neck surgery. The surgery was successful in that it took away the nerve pain in Ms. Caldwell's left arm. Unfortunately, the neck pain itself, along with what are known as cervicogenic headaches, persisted. We spoke with a number of Ms. Caldwell's friends and coworkers, in addition to her children, and all of them attested to the physical challenges she had endured since being hit by the dump truck. These are the living consequences of a truck driver and trucking company's reckless attitude toward public safety.

A Settlement Is Reached

Accidents involving commercial vehicles are very different than those involving only cars. The injuries are often worse, the contributing factors often require more investigation, and the settlements are generally larger. To achieve a full and lasting settlement in a truck wreck case, a lawyer needs to find out which, if any, South Carolina laws the trucking company violated. He/she needs to analyze not only the accident itself but all root causes, in order to determine how much the case is worth.

In this case, the settlement had as much to do with the company's recklessness and possible punitive damages as it did the physical harm to Ms. Caldwell. I am glad to say that even though Ms. Caldwell's injuries continue to impact her life on a near-daily basis, the settlement we secured will allow the best medical care, in addition to financial security, for many years to come.

While this incident took place in Columbia, our approach to client care and case investigation is the same no matter where in South Carolina the trucking accident occurred. If you have questions regarding settlement value or any other aspect of a potential case, please know we are here to help you just as we did Ms. Caldwell.