What are the Symptoms of a Brain Injury After an Accident? 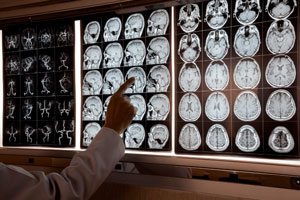 Suffering a brain injury is more common than some might think. In fact, according to the Centers for Disease Control and Prevention, an estimated 1.7 million people in the U.S. suffer a traumatic brain injury every year. In cases of minor injury, such as a mild concussion, the victim will typically recover over the course of 1-2 weeks with rest.  However, any trauma to the brain should be taken seriously because even a mild concussion can have major consequences.

If you suffered a head injury in a collision, the at-fault driver’s insurance company may be responsible for your medical costs, lost wages, future treatment needs, and pain and suffering. Contact the Law Office of Kenneth E. Berger today to speak to a traumatic brain injury attorney accepting cases in Columbia, Greenville, and across South Carolina.

In some cases, victims who suffer these injuries in a car wreck or on the job may be completely unaware of the harm. In fact, brain trauma often goes undiagnosed by emergency room doctors. Symptoms of traumatic brain injuries vary greatly, and you may not realize you sustained such an injury until days later.

With that in mind, it's important to be aware of the different symptoms of a brain injury, so you can recognize them in yourself or the people you care about after an accident. Likewise, it is important to know not only that damage occurred, but also what part of the brain has been affected. There are four lobes that make up our brain. We have a frontal lobe, temporal lobe, occipital lobe, and parietal lobe. Each lobe controls certain behaviors and functions. Therefore, an injury to the frontal lobe may produce different symptoms than damage to the occipital lobe.

The frontal lobe is responsible for decision-making, problem solving, and planning. Possible effects of an injury to this lobe include:

The parietal lobe’s main functions include receiving and processing sensory information from the body. When this particular lobe is affected due to a closed head injury, one may experience:

Dependent upon age, a person may be more or less likely to sustain a TBI and therefore incur a change in their quality of life.

How likely is it for someone in your age-group to suffer a TBI in an accident?

Getting Help from a TBI Attorney in South Carolina

Did you suffer a brain injury after a car accident? Legally, the negligent driver’s insurance company may be required to compensate you for the damages you’ve incurred.

Learn more about filing a claim for your injury by calling our personal injury firm today at 803-790-2800 or by contacting us via the live chat box below. You do not have to feel alone after your brain injury. We are here to help.