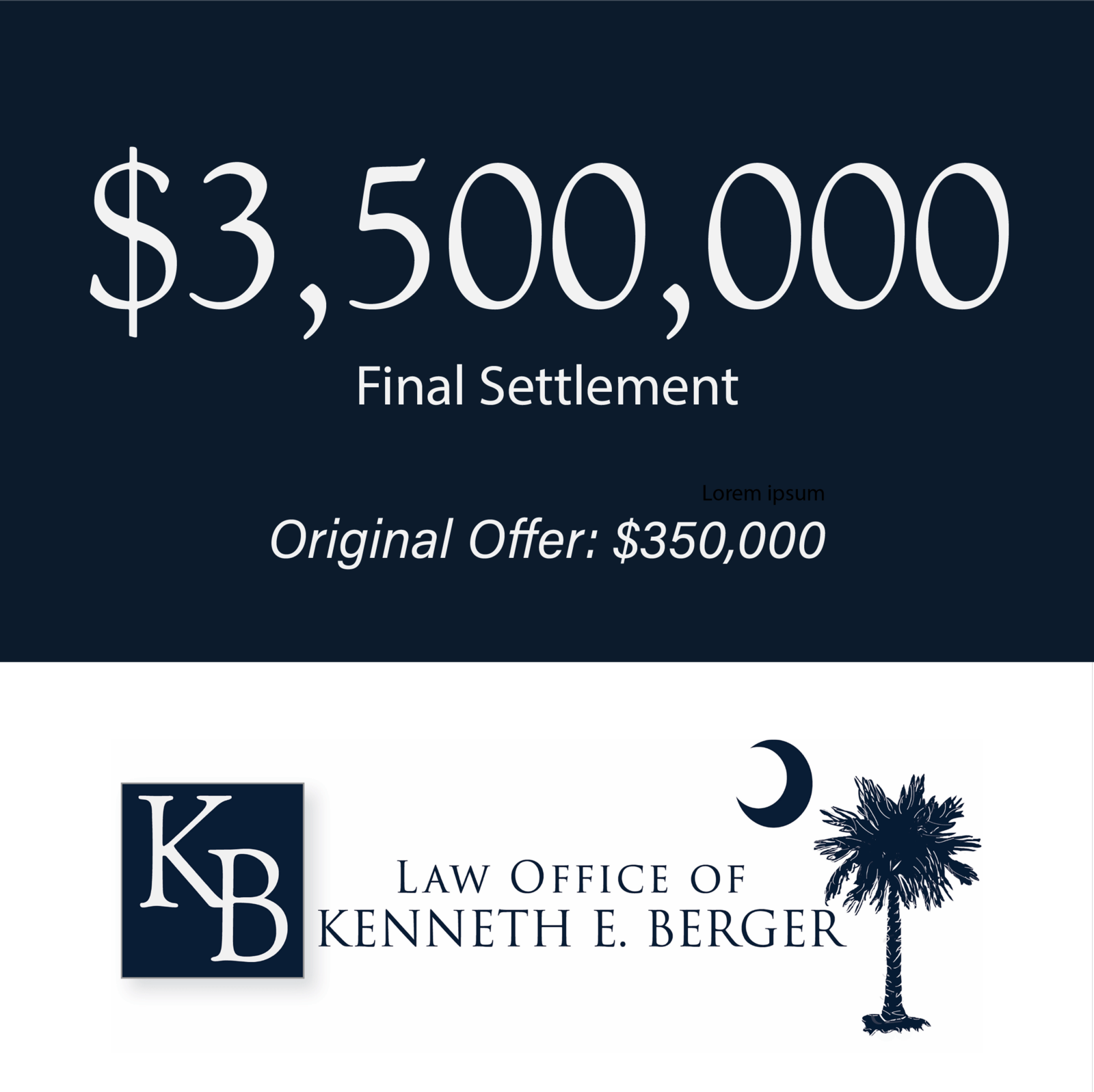 In the summer of 2020, we were able to reach a settlement for $3.5 million on behalf of a great man with a bad brain injury. The case began in late-2017, when the man and his wife were walking along a Charleston sidewalk. It was a Friday morning, approximately 8:30 a.m. The couple was drinking a cup of coffee and enjoying the weather. They were visiting South Carolina from the Midwest. At the same time, an SUV was waiting to pull out of a business parking lot. The driver of the SUV wanted to turn right. He was looking to his left, watching traffic, as the couple approached from his right. When the couple got within 20 feet of the SUV, the vehicle began backing up - presumably yielding to the couple - and the pedestrians continued down the sidewalk. However, when the pedestrians got in front of the vehicle, the driver pulled forward, knocking the man to the ground.

The male pedestrian was struck on his left side and could not brace himself as he fell back toward the roadway. His skull was fractured when his head the concrete. The SUV ended up on top of his left leg, resulting in multiple fractures. The injured man's wife began screaming at the driver to back up from on top of her now unconscious spouse.

A security camera captured the build-up, strike, and aftermath. Multiple witnesses stopped to assist the pedestrian, who was unresponsive and bleeding from his ears.

EMS took him to the hospital where he was diagnosed with a traumatic brain injury. Neurosurgery was not required, though surgical intervention for the leg injuries was performed. After a week in the hospital, the man's family drove him back west.

How the TBI Affected Our Client's Life

A neuropsychological exam performed less than 2 months after the accident led the doctor to conclude the patient was in large part fine.

However, the people who knew him best knew he was not the same. A follow-up MRI done in the spring of 2018 showed extensive brain damage, confirming his loved ones' fears.

We worked with the injured man's wife, mother, and friends to piece together a complete picture of the man's former life. During the course of repeated conversations and home visits, we learned about the man's childhood, professional rise, and what drove him. It became clear how much the brain injury impacted his everyday life, as well as his future.

The insurance company's lawyers argued that our client showed little outward sign of impairment. Their neurological expert asserted that the Plaintiff was "asymptomatic" with regard to his TBI. The expert was of course wrong, and his testimony was so one-sided that it likely helped us.

We mediated the case in Charleston, SC on February 27, 2020, at which time the defense offered $1,000,000. All indications were they might pay $2,000,000, but no more than that. In essence, the insurance company was testing whether we, or our client, would jump at such numbers, but the case was worth more than that, so we pressed ahead.

Between mediation and the summer of 2020, we collected additional video statements from lay witnesses and also obtained favorable court rulings that forced the defendant's tax returns to be produced. The resolution was sparked by a renewed time-sensitive demand that led the mediator to offer both sides a "double-blind" settlement of $3,500,000.00. When the parties independently agreed to the "double-blind" offer a confidential settlement of the brain injury lawsuit was reached.

This case represented another million-dollar-plus brain injury settlement in South Carolina for our law firm, and put our client and his wife in a position to meet their financial and medical needs for many, many years to come. Additionally, a great deal of credit should be given to Chris Finney and Mark Bringardner, who are tremendous lawyers, and served as the Plaintiffs' co-counsel.