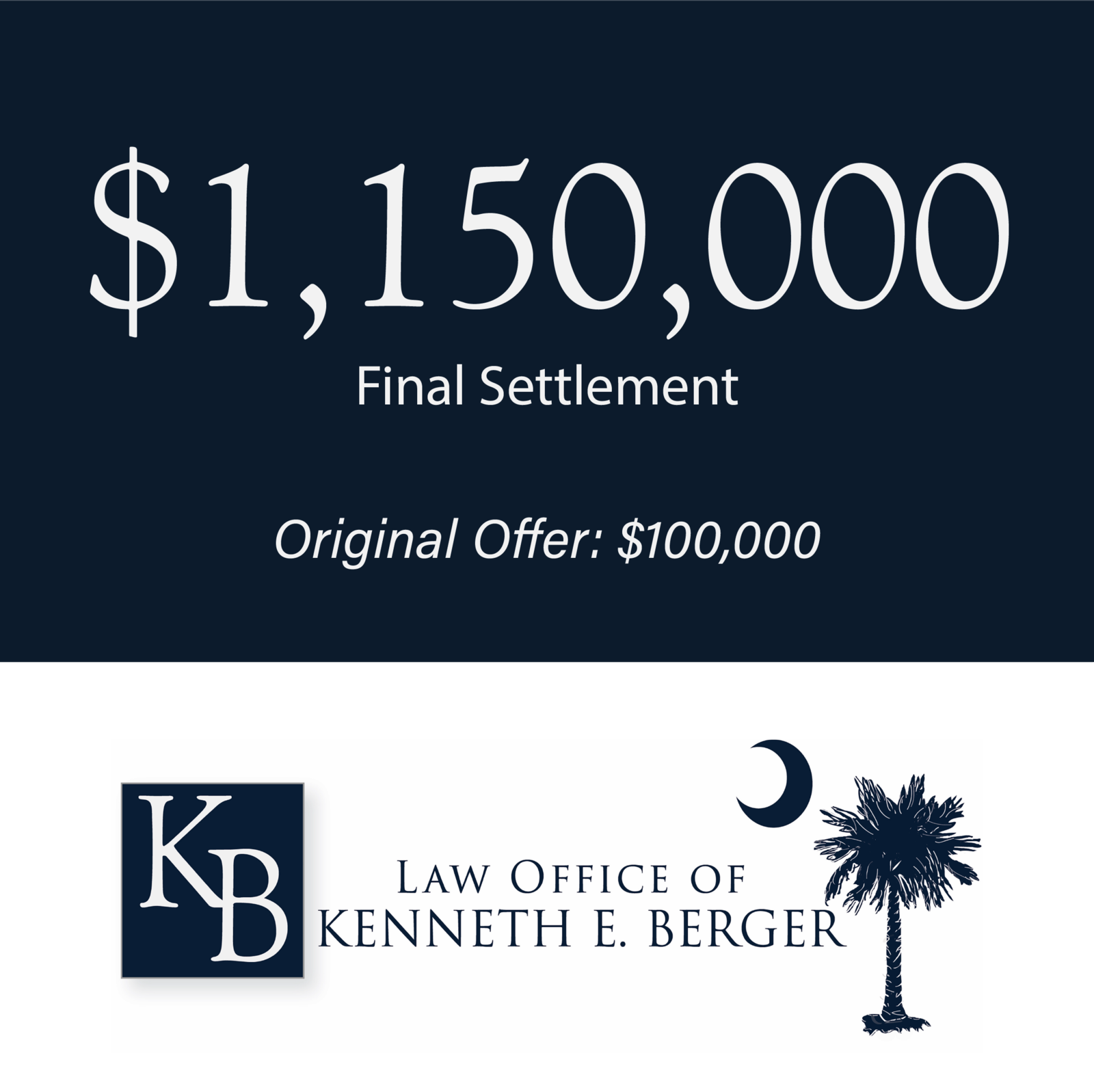 On Christmas Eve 2015, a Greenville bar served a customer the equivalent of 8.5 shots of liquor over the course of less than three hours. The drunk driver then got behind the wheel, and within minutes of leaving the bar, ran into a woman walking her dog. The accident fractured the woman's skull as she landed first on the windshield, then the pavement below. Her family contacted an Atlanta lawyer, who in turn asked around for the best DUI accident lawyers in South Carolina. While ethics rules prevent us from making any claim as to being the best, we can say that our law firm's name was provided to our Georgia colleague, and we were ultimately hired to represent this wonderful woman. The initial settlement against the drunk driver only took a few months, but the lawsuit against the bar required multiple experts, depositions, and far more work. No matter how hard we had to work, no one was going to stop until we achieved a fair result for our extremely deserving client.

We will call her "Ms. Timmons." She raised two sons as a single working mom in the 1970s and '80s. As she neared retirement, Ms. Timmons was diagnosed with breast cancer. She underwent extensive treatment, and has fortunately been in remission for many years. Along with her dedication to family, Ms. Timmons was very involved in her church. She also enjoyed hiking and the dog park before the drunk driving accident.

The wreck caused not only a skull fracture, but a brain bleed and back injuries as well. Ms. Timmons had to be hospitalized for several nights before being transferred to Greenville's Roger C. Peace rehabilitation unit. Due to the injuries sustained in the DUI wreck, doctors decided that Ms. Timmons would need help with her financial and legal affairs, so a conservator had to be appointed. There were concerns that Ms. Timmons may one day require assisted living because of her brain injury, but at present, she is able to live independently.

The Civil Case Against the Bar and Intoxicated Driver

Lawyers in South Carolina can pursue civil cases against negligent bars. Negligence, and even recklessness, can be proven by establishing that the bar served alcohol to someone it knew, or should have known, was intoxicated. Often times, that means locating receipts to show exactly how much alcohol was sold, when it was sold, and what the corresponding range of blood alcohol levels would have been when the drinks were being served. In this case, the Greenville bar's negligence became apparent once we got the receipt and deposed the bartender. Simply put, it was obvious that the bar broke the law, and therefore contributed to the DUI accident.

In addition to holding the bar responsible for its actions, we of course wanted to hold the drunk driver responsible for his own wrongdoing. That meant working with the solicitor's office to ensure all proper criminal charges were pursued. It also meant demanding that every applicable insurance policy was paid in full on his behalf.

Greenville is known as a conservative jurisdiction, and rightfully so. However, when it comes to cases involving drunk driving accidents, Greenville jurors return verdicts that echo their belief in public safety and lawfulness. We do not want bars over-serving people, then failing to offer alternative transportation. This is because when people are served to the point of intoxication, then allowed to get behind the wheel, innocent people like Ms. Timmons suffer.

Ms. Timmons needed a South Carolina lawyer with experience handling DUI accident cases in light of the legal nuances and scientific aspects of such a case. After meeting with and getting to know Ms. Timmons, I can say it was an honor to not only call her a client, but also a friend. The $1,150,000 settlement was approved by the court with the help of a conservator, who is in turn making sure that Ms. Timmons' money is properly protected.

My law firm has represented individuals and families affected by drunk driving collisions in Greenville and other parts of South Carolina for a number of years, achieving lasting results and making lasting friendships. If you have any questions regarding this, or another type of serious injury or wrongful death case, our job is to help. You may contact us through the live chat feature on the website, or at one of our convenient statewide phone numbers.

If you have been injured or lost a loved one due to a drunk driver, the attorneys at the Law Offices of Kenneth E. Berger are here for you. We believe in protecting the legal rights of those who have been harmed, and we want to help you and your family begin the recovery process today. Even if you’re not sure that you have a case, contacting a drunk driving accident lawyer sooner rather than later can ensure that your legal right to pursue compensation in a court of law is protected.