Amusement Park Injuries in and Around Myrtle Beach: What You Need to Know Now 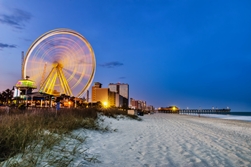 Myrtle Beach is a beautiful vacation destination for people of all ages, full of sun, sand, and fun for the whole family. For many, a favorite part of any trip to Myrtle Beach is a visit to one of the many local amusement parks, full of things like games, junk food, and thrilling rides. Places such as The Pavilion Park, Family Kingdom, Wonderworks, and of course the SkyWheel promise a breathtaking good time for everyone. With the promise of a thrill, though, also comes a dash of danger. It’s time to get the facts about Myrtle Beach amusement park injury accidents so that you know what to do if your vacation takes a turn for the worst.

Sadly, accidents at amusement parks are more common than anyone cares to talk about. A National Safety Council survey indicates that as many as 1,150 people were injured in 2014 at fixed-site amusement parks—which is actually an improvement over prior years.

Some of the most common causes of injury or death at amusement parks from rides, water amusements, or other related hazards includes the following:

Other types of injuries that can happen in amusement parks include strokes, heart attacks, torn ligaments, lacerations, bruises and more.

Though fun, amusement parks are inherently dangerous, and there are many different ways that a visitor can be hurt. Here’s a list of some of the biggest points of failure that can cause an injury to an unwary vacationer:

In North Carolina, the NC Department of Labor (NCDOL) Elevator and Amusement Device Bureau is generally responsible for safety inspections of amusement rides, though the Consumer Protection Safety Bureau also has the authority to inspect mobile amusements. The NCDOL requires permits for new ride installations, ride alterations, and performs periodic inspections throughout the year.

Inspections for water parks are slightly different from regular “dry” amusement parks. While mechanical rides generally still must be inspected by the NCDOL, the quality of the water may not be. In 2016, an 18-year-old woman who had visited a water park in Charlotte died due to infection by N. fowleri, a deadly amoeba (a type of single-cell organism) that attacks the brain. Tests later confirmed that the infection came from a water park, and it was revealed that since the park was considered an “open body of water” it did not require the same water quality inspection process as a public swimming pool would. Water parks are generally safe, but it might be wise to wear nose plugs or avoid getting water in your nose and avoid submerging your head as much as possible.

Get Legal Help If You’ve Been Hurt on a Ride

If you or someone you love has been hurt or even killed as a result of negligence by an amusement park or its employees, you may have legal options. A personal injury lawsuit can compensate you for negligence that resulted in personal injuries or even wrongful death. While money can’t take back an injury or a loss, it can help pay for medical bills, rehabilitation, lost wages, pain and suffering, and more. To talk to an experienced Myrtle Beach personal injury lawyer about your potential case and the compensation that you may be owed, contact us online today or call us at 803-790-2800. Our offices are conveniently located in Columbia and Myrtle Beach, and we have been proudly servicing clients throughout the surrounding areas. Contact us online today or call us at 803-790-2800 (Columbia, SC) / 843-427-2800 (Myrtle Beach, SC).