Hit From Behind By a Semi Truck? 5 Things You Must Know

Were you rear-ended by a semi-truck in South Carolina? 18-wheeler and other semi-truck rear-end crashes happen far more than they should in South Carolina. In fact, if heavy trucks would keep a safe following distance, travel at a safe speed, and keep a proper lookout, the number of rear-end collisions would drop immensely. However, if you are reading this article, it’s probably because you already got hit from behind by a truck.

To that end, there are 5 things our South Carolina truck accident attorney believes people must know after this type of wreck to ensure their legal rights are respected, upheld, and fulfilled.

1.  How to Prove the 18-Wheeler is Clearly at Fault for the Rear End Crash 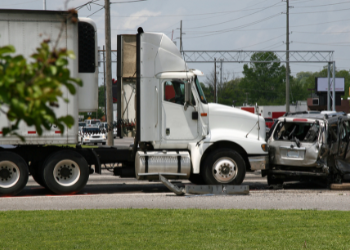 In some cases, nothing could be clearer. Other times, the truck driver and his company will vigorously argue that you, or some other vehicle, are actually at fault. I have seen truckers blame “John Doe” drivers, sudden braking vehicles, road crews, and everyone in between for their own negligence. While it is true that “third parties” sometimes contribute to the accident, rarely does a rear end crash occur without some degree of negligence on the part of the truck driver.

South Carolina’s trucking laws allow us to demand that all evidence from a wreck be preserved. That includes information contained on the truck’s “event data recorder,” where data concerning speed, braking, and drive time is stored. We want to get this evidence to create a timeline of the hours, minutes, and seconds leading up to the rear end collision.

We also want to track down all potential video footage from highway and business surveillance cameras, in addition to identifying and speaking with all eyewitnesses.

Put simply, the best way to prove the semi caused the crash is by collecting evidence from the truck itself, video cameras, and independent witnesses. Trucking companies are notorious for trying to quickly repair damaged trucks and get them back into service, potentially destroying evidence. We recommend sending a preservation of evidence letter as soon as possible to have a better chance of securing and preserving evidence.

2.  The Most Common Causes of Rear End Truck Collisions

I mentioned it at the top of this page, but it bears repeating that speed, following distance, and driver inattention are some of the main reasons people get hit from behind. This is true when it comes to ordinary car accidents, but can be even more catastrophic when semi trucks are involved.

Truck drivers are often under pressure to deliver as many loads as quickly as possible. This leads to restless, reckless driving, and can also cause fatigue. When drivers get tired, their reaction time slows (or they fall asleep), and the likelihood of a rear end truck collision on a South Carolina roadway increases. Likewise, some truckers resort to drugs to stay awake, which often results in equally disastrous consequences.

If you got hit from behind by an 18 wheeler, you will want to uncover not only what happened, but why it happened, to hold the wrongdoers 100% accountable.

3.  What Are Your Legal Options After Getting Hit From Behind By a Semi Truck?

Before thinking about lawsuits or trials, allow me to reassure you that you may be able to settle your case “pre-suit” with the truck driver’s insurance company. Some people are confident in their ability to reach a settlement without a lawyer, but I would suggest at least getting a free consultation before trying to negotiate on your own.

If you decide to speak with a lawyer about a South Carolina rear end truck crash, that does not mean you have to hire him/her. Rather, do a consultation for free by phone or in person, then make an informed decision. Additionally, most if not all lawyers who focus on trucking cases, will handle everything for you on a “contingency basis.” In other words, you should never come out of pocket to pay the attorney any type of retainer or hourly rate.

It is also important to know that very few attorneys focus the majority of their practice on truck or other life-changing injury cases. When determining whether to hire a lawyer and deciding which attorney you want helping with your case, make sure he/she actually knows what they’re doing. I would no more want a foot surgeon operating on my brain than I would someone who only dabbles in trucking litigation to represent my family after a semi truck rear ended us.

4.  How to Get a Fair and Full Settlement if an 18 Wheeler Rear Ended You

Rear end collision settlements are based on “damages,” which is simply a legal term for the idea that money should be paid to compensate a person for every harm or loss they suffered. In South Carolina, semi truck settlements should account for all medical charges (regardless of whether there were any out of pocket costs), lost income, and future loss of earnings. These types of losses are called economic damages.

The settlement should also take into consideration your pain, suffering, and lost enjoyment of life. These are called non-economic damages, but they can of course be the biggest part of your case depending on how your everyday life has, and will be, impacted.

Since you only get one chance to settle your case against a trucking company, the money you receive ought to factor in not only your damages to date, but any damages you are likely to incur in the future. This may include the cost of future medical care or a shortened career.

Punitive damages for a rear end truck collision are also important. These types of damages are intended to punish the truck driver or company for their recklessness. Whenever you hear about a large settlement or verdict due to a truck wreck, there is usually a punitive element.

5.  The Trucking Company May Have More Than One Insurance Policy

Under South Carolina and federal law, trucks must carry at least $750,000.00 in insurance coverage. Many trucks have more than that, but even then, it may not be enough to pay for the catastrophic damage caused by a rear end semi truck collision.

Even if the insurance company wants to pay its “policy limits,” be careful of accepting any offer before finding out whether there are other “excess” or “umbrella” policies that may be able to provide additional compensation. In one of our recent cases, the insurance company claimed they only had $1,000,000.00 in coverage, but after we refused their offer to pay it, they disclosed a $10,000,000.00 umbrella policy. You don’t get a second chance to settle your case or sign a Release even if more money becomes available, so make sure you’re aware of all existing sources of recovery before signing off on a settlement.

While these points should be helpful for anyone who has been rear ended by an 18 wheeler in South Carolina, they’re really just the tip of the iceberg. Trucking cases are often more nuanced and layered than an ordinary car accident, so I certainly encourage you to run any additional questions past one of our experienced truck accident attorneys.

If you or someone you love has been hurt in a truck accident, you need to reach out to a South Carolina truck accident lawyer. Contact the Law Office of Kenneth E. Berger today. Our experienced legal team understands that you are hurting both physically and financially after your accident, and we want to help you and your family get the justice that you deserve so that you can focus on the healing process. Our offices are conveniently located in Columbia and Myrtle Beach, and we have been proudly servicing clients throughout the surrounding areas. Contact us online today or call us at 803-790-2800 (Columbia, SC) / 843-427-2800 (Myrtle Beach, SC).