How Important is the Accident Report When Determining Fault in a South Carolina Truck Accident? 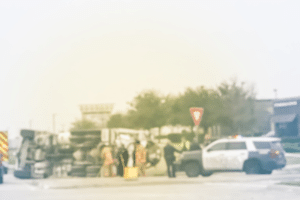 18 wheelers travel up and down South Carolina’s interstates 24 hours a day, 365 days a year. When they get in collisions with passenger vehicles, the harm is often significant, if not catastrophic. To hold the truck driver or his company liable, you must first prove the crash was their fault. The accident report may seem important, but in a civil case it is inadmissible. Instead, we rely on witness accounts and scientific data to establish who bears responsibility for the collision.

The general rule is that at trial, people may only testify as to what they personally witnessed. The most common exception – especially in tractor trailer cases – is that expert witnesses can provide opinions even if they did not see the collision. So what does this mean when it comes to the investigating officer’s findings? It means these findings never see the light of day at a civil trial. The cop may testify as to what he observed once he arrived at the scene, or what he heard the drivers say (hearsay exception), but he cannot give his opinion on who caused the crash.

In cases involving life-threatening injury or death, a special branch of the South Carolina Highway Patrol known as MAIT (Multi-Disciplinary Accident Investigation Team) might be called. One problem with MAIT investigations, however, is that the first – and sometimes only – person they speak with is often the truck driver. With their job and their livelihood on the line, the truck driver is liable to say anything to escape being found at fault. The other driver may be on the way to the hospital, unable to defend themselves or provide law enforcement with the truth.

Another problem with MAIT investigations is that unless the car crash resulted in a fatality, their work could be limited to “on scene” documentation. In other words, they do not engage in detailed, scientific analysis of how the accident actually occurred.

Most trucking accidents require us to hire at least one expert witness. The first of these experts is generally a “collision reconstructionist.” Our reconstructionist will do exactly what the title implies – he will “reconstruct” the crash using engineering principles. Based on factors such as weight, speed, skid marks, and angular force, our expert will help determine how it all happened. South Carolina law also allows us to download data from the tractor trailer’s “black box” to further analyze why they collided with you.

Additionally, we may hire a safety/regulatory expert to help identify how and why a trucking company failed to properly train and supervise its driver. Under state and federal law, the company is responsible for its acts as well as those of its employee. We will investigate whether the company complied with safety regulations that are in place to keep innocent people from harm, or whether it was negligent in its hiring, retention, and monitoring of the driver.

Truck Accident Lawyers Can Uphold Your Right To Safety & Justice

Our first concern for clients is always their health. Along that same line, please focus on your immediate medical needs before worrying over insurance and legal issues. However, as soon as you are physically able to seek help, I encourage you to at least contact a truck accident lawyer. Trucking accident cases are time sensitive, as companies might move the vehicle – and the black box – far away. Similarly, the sooner we can investigate the crash site, the more evidence we may able to obtain.

Do not be discouraged if the police officer or MAIT team put you at fault when you know that simply is not true. While proving liability is critical to your case, it is not determined by what highway patrol concludes. Rather, liability is based on facts. Those facts are discovered by way of thorough, scientific investigation, often including collision reconstruction.

To learn more about the ways we can help you after an 18 wheeler accident in South Carolina, call and set up a free consultation at 803-790-2800. I look forward to upholding your right to safety, and working to ensure responsibility falls on the proper shoulders.